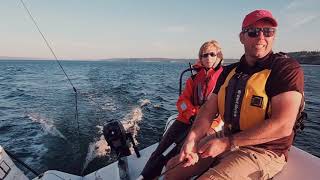 Come "round the buoys" with us!

Summer is almost here and there is a ton of sailing ahead. Come "round the buoys" with us in either the OHYC club racing or Windeseeker programs! Races start at 6pm in Penn Cove. Contact the Sail Fleet Captain at ohsailfleet@gmail.com for more information.

The crew of Family Affair, shown here in a race from 2015, helped skipper Thomas Buus of Woodinville win the 2018 Round Whidbey regatta. (Photo by Dennis Pearce) Overcoming lighter than normal winds, Woodinville’s Tom Buus skippered Family Affair to first place in the annual Round Whidbey sailing regatta last weekend. The lack of wind caused several boats to drop out. Those that finished didn’t come up Saratoga Passage until the “wee hours” of Sunday morning, according to rac

Yeah Dogg holds off Lucky Jim for the series win.

The Holcomb family of the SV Yeah Dogg during the last night of the Spring Series May 17, 2018 After 5 weeks of sailing, Yeah Dogg edged out Lucky Jim for the series win. Yeah Dogg had 9 points followed by Lucky Jim with 10 points. Each boat claimed two first place finishes in the series. Team Renaissance claimed the 3rd place spot with 18 points. Reults can be found at: https://www.ohyc.org/sail-fleet Pair split latest event / Sailing by Jim Waller Friday, May 18, 2018 9:23

Join us for Rules of Racing

Sailing Movie and Pizza is Back!